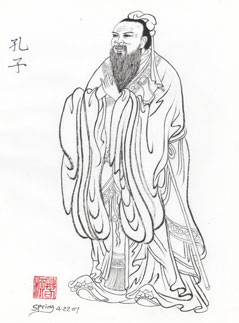 Chinese philosophy originated during a time known as the Spring and Autumn period and the Warring States period of ancient China from the sixth to the third centuries BC.   (China entered into the Spring and Autumn Period around 500 BC, about the same time that the first Greek philosophers emerged.)  During this time philosophers and schools flourished, and created what became known as the “Hundred Schools of Thought”, which brought significant intellectual and cultural developments.  It was during the Warring States era that the major philosophies of China (Confucianism, Mohism, Legalism, and Taoism) arose.

Confucianism comes from the teachings of Kong Fuzi, or “Confucius”  in Latin (551 – 479 BC).  His philosophy addressed ethics and politics, emphasizing morality and justice.  Along with Legalism, Confucianism helped create the world’s first meritocracy, where the individual’s status is determined by education and character rather than ancestry, wealth, or cronyism.  Confucianism continues to influence

Some of the major concepts of Confucianism are:

Taoism (“The Way”, or “The Path”) is a philosophy based on the writings of Tao Te Ching.  Although Taoism has religious aspects to it, the philosophy serves as a counter to Confucianism which advocates action.  Taoism advocates nonaction (wu wei), the strength of softness, spontaneity, and relativism.  In Taoism, there is no absolute truth.  Enlightenment comes from knowing yourself.

Legalism (Pinyin) is a political philosophy of the Qin dynasty, designed to uphold the rule of law.  In Legalism a ruler should govern his subjects by the following trinity:

Legalism was blamed for creating a totalitarian society, and has faded in popularity as a result.

The School of Naturalists was a Warring States era philosophy founded by Zou Yan that attempted to explain the universe in basic forces of nature by developing the concepts of yin-yang (he universe consists of equal and opposite yet complementary forces) and the Five Elements:

Mohism was a Chinese philosophy developed by the followers of Mozi (470 BC–391 BC) that evolved at about the same time as Confucianism, Taoism and Legalism.  Mohism opposed political nepotism, believing that important governmental positions should be given to people based on their abilities rather than their relationship to the ruler.

Neo-Confucianism combined the ideas of Buddism and Taoism into a more metaphysical framework. Its concepts include li (principle, akin to Plato’s forms), qi (vital or material force), taiji (the Great Ultimate), and xin (mind).