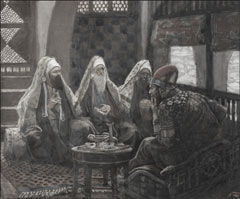 Persian (or Iranian) philosophy can be traced back to ancient Indo-Iranian roots greatly influenced by Zarathustra’s teachings, or “Zoroastrianism“.  Throughout Persian history a wide spectrum of viewpoints can be seen from Old Iranian and especially Zoroastrianism-related traditions to the late pre-Islamic era such as Manicheism and Mazdakism, to the various post-Islamic schools. Iranian philosophy after the Arab invasion of Persia displays the influence of Greek philosophy along with the development of Islamic philosophy. The teachings of Zoroaster appeared in Persia around 1700-1800 BC. His wisdom became the basis of the religion Zoroastrianism, and strongly influenced the development of the Iranian branch of Indo-Iranian philosophy.  Zarathustra is believed to be one of the oldest monotheists in the history of religion, and was the first who treated the problem of evil in philosophical terms. His views had a significant influence on Greek and Roman philosophy.  Plato, for example, incorporated some of them into his views on realism.  Zarathustra’s impact is still seen today due in the system of rational ethics he founded called Mazda-Yasna.(Worship of Wisdom).

Manichaeism, founded by the prophet Mani (216–276 AD), was influential from northern Africa to China.  It taught a dualistic view of the universe wherein a cosmic accident resulted in light (good) and darkness (evil), and man’s quest was to gravitate toward the light by doing good.  Saint Augustine of Hippo converted to Christianity from Manichaeism, which he denounced in his writings.

Mazdakism, founded by the Zoroastrian prophet Mazdak (524-528 AD), was a reformed version of Zoroastrianism with a similar concept of dualism to that of Manichaeism.

Zurvanism, named after the Zoroastrian god of creation Zurvan, was another branch of Zoroastrianism dating  back to the fourth century BC.  There were three views in Zurvanism – Aesthetic, Materialist, and Fatalistic.

Avicennism, dating back to the Golden Age of Islam in the 12th century, was established by the Persian philosopher Avicenna who took elements of the philosophies of both Aristotle and Plato.

Illuminationism was another philosophy from 12th century Islam, founded by Shahab al-Din Suhrawardi, although it was also seen in ancient Greek philosophy.  Persian illuminationism taught that entities are produced and guided by light.

Transcendent Theosophy was founded by Mulla Sadra in the 17th century, and created a major transition from essentialism to existentialism in Islamic philosophy several centuries before this occurred in Western philosophy.