Rastafarianism began in Jamaica in the 1930s following the coronation of Haile Selassie I (1892-1975) as Emperor of Ethiopia in 1930. There are roughly one million adherents worldwide.  Although Selassie himself was a lifelong Ethiopian Orthodox Christian, some Rastafarians see Selassie as God, some as Christ incarnate, and some simply as a prophet who continued God’s work on Earth, and often refer to him as Jah Rastafari.  Members of the Rastafari way of life are known as Rastas, Rastafari, or Ras. The term “Rastafarianism” is considered offensive by most Rastafari, who are critical of “isms” which they consider part of Babylon culture.

The name Rastafari is taken from Ras Tafari, the title (Ras, or “head”) and first name (Tafari Makonnen) of Haile Selassie I before his coronation.  “Jah” (or “Yah” in Hebrew) is a Biblical name of God, from a shortened form of Yahweh or Jehovah found in Psalms 68:4.

Much of Rastafarianism reflects its origins in Jamaica and Ethiopia. Ethiopian Christianity traces its roots to the Church of Alexandria, Egypt founded by St Mark, which led to the formation of the Coptic Church of Alexandria in the 5th century. Rastafarianism holds to many Christian beliefs like the Trinity and the Incarnation.  Rastafarians accept much of the Bible, although they believe that its message and interpretation have been corrupted.

Rastafarianism promotes the spiritual use of cannabis and the rejection of materialism, oppression, and sensual pleasures, called “Babylon”. It proclaims Ethiopia (or “Zion”) as the birthplace of man.  The future capital city of Zion is sometimes put forward as the New Jerusalem.  Some Rastafarians also promote various Afrocentric themes.

Haile Selassie I (1892–1975) was the Emperor of Ethiopia from 1930 to 1974. Rastafari say that he will lead the righteous into creating a perfect world called Zion.  The death of Haile Selassie I is a topic of some debate amongst Rastafari. Some Rastas consider it a partial fulfillment of prophecy of the “Temporary Messianic Kingdom” found in the apocalyptic 2 Esdras 7:28. Others believe that Haile Selassie’s 1975 reported death was a hoax. It has also been claimed that he entered a monastery and is now known by many as Abba Keddus (Amharic for Holy Father) and will return to liberate his followers and vanquish all evil, restoring his creation. One Rastafari reaction to Haile Selassie’s supposed death was contained in Bob Marley’s song Jah Live, which declares emphatically that “God cannot die.” Many Rastafari claim to have met Haile Selassie after his reported death and know him also by his claimed new name Abba Keddus.

Rastas see Marcus Mosiah Garvey as a prophet, with his philosophy fundamentally shaping the movement, and with many of the early Rastas having started out as Garveyites. He is often seen as a second John the Baptist. One of the most famous prophecies attributed to him involving the coronation of Haile Selassie I was the 1927 pronouncement “Look to Africa, for there a black king shall be crowned,” although an associate of Garvey’s, James Morris Webb, had made very similar public statements as early as 1921.Marcus Garvey promoted Black Nationalism, black separatism, and Pan-Africanism: the belief that all black people of the world should join in brotherhood and work to decolonise the continent of Africa — then still controlled by European colonial powers.

He promoted his cause of black pride throughout the 1920s and 1930s, and was particularly successful and influential among lower-class blacks in Jamaica and in rural communities. Although his ideas have been hugely influential in the development of Rastafari culture, Garvey never identified himself with the movement. Garvey was even critical of Haile Selassie for leaving Ethiopia at the time of the Italian Fascist occupation, “Hailie Selassie is the ruler of a country where black men are chained and flogged…He will go down in history as a great coward who ran away from his country.” In addition, his Universal Negro Improvement Association disagreed with Leonard Howell over Howell’s teaching that Haile Selassie was the Messiah. Rastafari nonetheless may be seen as an extension of Garveyism. In early Rasta folklore, it is the Black Star Line (actually a shipping company bought by Garvey to encourage repatriation to Liberia) that takes them home to Africa.

A “groundation” (also spelled “grounation”) or “binghi” is a holy day; the name “binghi” is derived from “Nyabinghi” (literally “Nya” meaning “black” and “Binghi” meaning “victory”). Binghis are marked by much dancing, singing, feasting, and the smoking of ganja, and can last for several days.

“Princes and princesses shall come forth out of Egypt, Ethiopia now stretch forth her hands before Jah. O Thou God of Ethiopia, Thou God of Thy Divine Majesty, Thy Spirit come into our hearts, to dwell in the paths of righteousness. Lead and help I and I to forgive, that I and I may be forgiven. Teach I and I Love and loyalty on earth as it is in Zion, Endow us with Thy wisemind, knowledge and Overstanding to do thy will, thy blessings to us, that the hungry might be fed, the sick nourished, the aged protected, the naked clothed and the infants cared for. Deliver I and I from the hands of our enemy, that I and I may prove fruitful in these Last Days, when our enemy have passed and decayed in the depths of the sea, in the depths of the earth, or in the belly of a beast. O give us a place in Thy Kingdom forever and ever, so we hail our majesty Haile Selassie I, Jehovah God, Rastafari, Almighty God, Rastafari, great and powerful God Jah, Rastafari. Who sitteth and reigneth in the heart of man and woman, hear us and bless us and sanctify us, and cause Thy loving Face to shine upon us thy children, that we may be saved, Selah.”

The wearing of dreadlocks is very closely associated with the movement, though not universal among, nor exclusive to, its adherents. Rastafari maintain that locks are required by Leviticus 21:5 (“They shall not make baldness upon their head, neither shall they shave off the corner of their beard, nor make any cuttings in the flesh.”) and the Nazirite law in Numbers 6:5 (“All the days of the vow of his separation there shall no razor come upon his head: until the days be fulfilled, in the which he separateth himself unto the Lord, he shall be holy, and shall let the locks of the hair of his head grow.”).  Also, according to the Bible, Samson was a Nazirite who had “seven locks”. Rastafari argue that these “seven locks” could only have been dreadlocks, as it is unlikely to refer to seven strands of hair.

Locks have also come to symbolize the Lion of Judah (its mane) and rebellion against Babylon.  Rastafari associate dreadlocks with a spiritual journey that one takes in the process of locking their hair (growing hairlocks). It is taught that patience is the key to growing locks, a journey of the mind, soul and spirituality. Its spiritual pattern is aligned with the Rastafari movement. The way to form natural dreadlocks is to allow hair to grow in its natural pattern, without cutting, combing or brushing, but simply to wash it with pure water and herbal shampoo.

For Rastafari the razor, the scissors and the comb are the three Babylonian or Roman inventions. So close is the association between dreadlocks and Rastafari, that the two are sometimes used synonymously. In reggae music, a follower of Rastafari may be referred to simply as a “dreadlocks” or “natty (natural) dread”.

Music has long played an integral role in Rastafarianism, and the connection between the movement and various kinds of music has become well known, due to the international fame of reggae musicians such as Bob Marley and Peter Tosh. 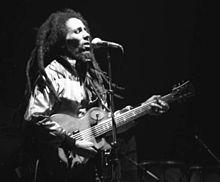 Niyabinghi chants are played at worship ceremonies called grounations, that include drumming, chanting and dancing, along with prayer and ritual smoking of cannabis. The name Nyabinghi comes from an East African movement from the 1850s to the 1950s that was led by people who militarily opposed European imperialism.  African music survived slavery because many slave-owners encouraged it as a method of keeping morale high. Afro-Caribbean music arose with the influx of influences from the native peoples of Jamaica, as well as the European slave-owners.  Reggae began to enter international consciousness in the early 1970s, and Rastafari mushroomed in popularity internationally, largely due to the fame of Bob Marley, who actively and devoutly preached Rastafarianism.