They say you shouldn’t talk about politics or religion in polite company.  The reason for this is simple.  These two subjects often inflame passions, and can quickly turn a friendly conversation into an unfriendly one.  As a way of promoting peace and civility, we usually politely avoid these contentious issues in social settings.

As a blogger who discusses religion and philosophy it’s difficult for me to avoid such topics, but I always try to approach them with a certain amount of respect for those who hold different views.  It’s not always easy, but for the sake of civility I have to make the effort.

This past election season was the ugliest in memory.  Donald Trump’s insults and name-calling seemed to rewrite the rules for campaigning, simply because it worked.  He demolished his Republican opponents and then surprisingly defeated Hillary Clinton in the general election, even after the offensive Access Hollywood tape was made public.  Since his inauguration his opponents have sought to delegitimize his presidency with an endless string of allegations, investigations, and calls for impeachment.

Late night television has also adopted new norms, as anti-Trump jokes and rhetoric have taken over talk shows.  When I was growing up the rule for talk show hosts like Johnny Carson was to remain neutral, and make jokes about both candidates and both parties so as not to offend a large part of the viewers and drag the ratings down.  Those days are gone.  Now you’re going to get left behind if you don’t attack Trump in your monologue.  (Just ask Jimmy Fallon.)  Saturday Night Live does regular anti-Trump sketches, ridiculing not only the president but his staff and family as well.

But when Kathy Griffin did a photo shoot last week holding a fake severed head of President Trump, the entertainment world suddenly recognized where the line was, and strongly condemned Griffin’s misguided attempt to capitalize on the widespread anti-Trump sentiment.  Chelsea Clinton, to her credit, took to Twitter and condemned the photo.  That seemed to open the floodgates of criticism, and within a couple of days Griffin had lost her contracts with Squatty Potty and her job at CNN despite issuing an apology via video.

Later in the week Ken Jennings, the famous Jeopardy champion with the record winning streak, tweeted “Barron Trump saw a very long necktie on a heap of expired deli meat in a dumpster. He thought it was his dad & his little heart is breaking”.  Apparently this was his idea of humor in mocking those who sympathized with the Trump family over Barron Trump’s reaction to the video when he saw it on TV.  This just goes to show you that even very smart people do very foolish things.

I can’t help but ask however … how did we get here?  How did we get to the point where a comedian actually thought that it was appropriate to depict herself mimicking an ISIS-like decapitation of our elected leader?  How did 11-year old Barron Trump become acceptable fodder for public ridicule by celebrities?  This didn’t happen overnight.  It’s the result of a long slide into moral and civil decay by a nation that has long prided itself on how it values civility.

John Adams once stated that a lack of civility could jeopardize the survival of the nation.  When you lose an appreciation for mutual respect, you lose the ability to engage in proper discourse.  You can no longer disagree without demonizing those whose views differ from yours.  You lose respect for authority figures.  That makes it more difficult for teachers to teach, for workers to be productive, for law enforcement to maintain order, and for lawmakers to lead. 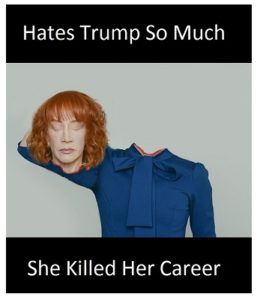 “Civility” comes from the Latin civis for “the city”, and “politeness” comes from the Greek polis, which also means “the city”.  So, in effect civility and politeness are indications of how best to interact in communities where citizens are interdependent.

Socrates believed that the discovery of truth can only come from rigorous debate.  Ralph Waldo Emerson once said “A foolish consistency is the hobgoblin of little minds.”  In other words, foolish people cling to their ways even in the face of evidence that there’s a better way to see and do things.

In order for society to progress we need to discuss issues with people who have different viewpoints, and be open to new ways of looking at things because none of us has all of the answers.  And in order for us to have thorough discussions we have to have civility.  We have to have guidelines for the respectful discussion of our differences.

This isn’t just a matter of “be nice” or “mind your manners”.  This is a matter of seeing the big picture.  Civilization depends on civility.  When you have civility everybody benefits from shared perspectives.  Conversely, when you lose civility you endanger civilization.

While many are worried about ISIS, North Korea, or some other ideological or military threat it may very well be that the biggest danger we face is from our own decaying civility.  Our declining ability to engage in discourse without demonizing our opponents and resorting to insults, profanity, name-calling, and threats weakens the very fabric of our democracy – freedom of speech.  And when we lose that, we lose everything.
6/14/2017   UPDATE!!!
Early Wednesday morning a gunman by the name of James T. Hodgkinson opened fire on a group of Republican congressmen who were practicing for a charity softball game scheduled for Thursday night.  Hodgkinson was a reported disgruntled liberal who had ranted online about President Trump and Republicans.  While I don’t directly blame Democrats for encouraging violence, I do feel that the current uproar over allegations of the Trump campaign being in collusion with Russia to contributed to this maniac’s delusions.  According to  his brother he was angry about the election results, feeling that Trump had stolen the election.  While there may be evidence that Russians tried to influence the election, there has never been any evidence that they altered the results in any way.  Likewise there is no evidence of collusion, voter suppression, voter fraud, or any other attempt by Trump or the Republican Party to illegally tilt the results in Trump’s favor.  By beating a dead horse on this matter month after month the anti-Trump forces are weakening the confidence of the American people in our electoral process, and that has consequences.
Civility and Civilization

3 thoughts on “Civility and Civilization”