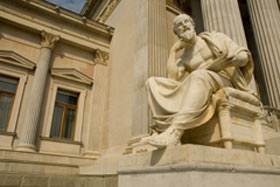 Philosophy is the study of reality, existence, knowledge, morality and human nature.  It is usually divided into three branches –  natural philosophy, moral philosophy, and metaphysical (meaning “beyond the physical”) philosophy.  The word “philosophy” comes from the Greek word philosophia, meaning “love of wisdom” or “friend of wisdom”, and is thought to have originated with the ancient Greek philosopher and mathematician Pythagoras.  The term ‘philosophy’ can refer to any body of knowledge, such as a business philosophy or a teaching philosophy.

Everything that we do in life involves philosophy.  In fact a doctorate is referred to as a PhD, which means “doctorate of philosophy”, whether the area of study is economics, medicine, chemistry, music, or philosophy itself.  When you use a computer or a mobile device, you’re using technology that was produced through natural philosophy in  the scientific method regarding electrons and circuitry.  When you get medical attention, your physician is treating you based on the medical training he or she received through years of study at institutions of higher learning stemming from the academies of the ancient Greek philosophers.  When you discuss politics, you’re discussing your views on how governments should be run, which is taken from the world of philosophy and is now called political science.  Whether we realize it or not, philosophy is always with us in one form or another.

Epistemology is the area of philosophy concerned with the nature and scope of knowledge, such as the relationships between truth, belief, perception and theories of justification.  Within the scope of epistemology are empiricism (relating to reality through experience or what can be perceived by the senses), idealism (relating to reality apart from the senses in things like theories, faith, and intuition), rationalism (the view that reason is the main source and test of knowledge), and skepticism (which questions the validity of all human knowledge).

Metaphysics deals with the nature of reality.  Within metaphysics there’s a wide range of theories.

Ethics, or “moral philosophy,” is the branch of philosophy that deals with the question of the best way to live, and whether this question can even be answered.  Within the scope of ethical philosophy are: