Two years ago my good friend Marcus Curtis published an eBook about a very popular subject in the underbelly of the investment world – the global currency reset.  Supposedly the Federal Reserve is going away, and the world’s currencies are going to be backed by assets again.  Since the U.S. dollar has been insanely overprinted and the national debt is approaching $20 trillion, the dollar is soon to collapse and other currencies will have a new and improved valuation based on their natural resources.  The global elites (the “cabal” for the anti-Semitic crowd and the Illuminati for the anti-Catholic crowd) are being arrested and shut down as the world’s wealth is returned to the common people from whom it was stolen centuries ago.

If all of this sounds kind of nutty, it’s probably because it kinda is.  Nevertheless, the internet is saturated with conspiracy theorists who truly believe in this junk economics.  That why Marcus wrote “The Truth About The Coming Global Currency Rest”, to address the misinformation and disinformation from scammers and unscrupulous precious metals dealers that was misleading many inexperienced investors in their decision making.  The book sold fairly well, and has received mostly favorable reviews on Amazon despite the fact that many weren’t particularly thrilled to hear what he had to say about the matter. 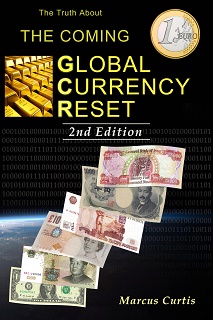 Now Marcus has revised the book for 2017 (now available in a printed version) with a fascinating study of the Federal Reserve and its history, along with a discussion of new information that has come to light since January of 2015.  The fact is the dollar is the strongest it’s been since 2003, and other currencies like the euro, the Chinese yuan, and the Brazilian real are losing ground.  Nations are running to the dollar because it’s the undisputed international reserve currency, and is considered the most stable currency to hold.

In the revised version Marcus delves into the history of the petrodollar system, the 2008 financial meltdown, Bretton Woods, the Nixon Shock, the Trilateral Commission, the PIIGS, the BRICS, Keynesian economics, fiat currency, and fractional reserve banking among many other topics.  If you’re considering stocking up on gold and dehydrated food and stockpiling guns based on what you hear from people selling gold, investment newsletters, bible prophecy books, or other doomsday products you might want to get a copy of this book to get the facts in place of hype.
The Truth About The Coming Global Currency Reset
Marcus Curtis Revamps