I grew up Southern Baptist.  It was all I knew.  But when I was a junior in high school in 1974 I met some Assembly of God kids and began visiting their church.  It was quite a contrast from First Baptist Church.  They had a drummer, a bass player, a violinist, a flutist, and a trumpeter in addition to the pianist and organist that I was used to.  The people clapped along with the old camp meeting songs like I’ll Fly Away and Just Over in the Glory Land.  They also raised their hands in worship and shouted “Amen” and “Hallelujah!”

But what intrigued me the most was the fact that they would exercise gifts of the Spirit during the service.  People would often deliver a word of prophecy or tongues with interpretation, and it was common to see them pray for the sick right there in the church.  (My church prayed for the sick who weren’t there on Wednesday nights.  You know … “Bless Brother Andrews who is the hospital with “fill in the blank“).  It was exciting to see people praying for healing and actually expect God to show up and do something.

When I was about nineteen I drove to Dallas with a few friends to visit Beverly Hills Baptist Church on Easter Sunday.  (Larry Lea started out as the youth pastor at BHBC.)  They met in the Bronco Bowl auditorium in South Dallas.  They had recently been disfellowshipped from the Texas Southern Baptist Convention due to their charismatic approach to worship.  The church grew from a little over 500 to 5,000 within a few years of the time their pastor Howard Conatser received the infilling of the Holy Spirit and began sharing his experience with his congregation.  People in our church were talking about it, and my friends and I wanted to see it for ourselves.

It was a service like I had never experienced up until that time.  The music was incredible.  They had what appeared to be a full orchestra accompanying the worship.  Thousands of people were raising their hands in praise to God, and doing what I call the charismatic vamp, where the musicians play one chord continuously while people sing improvised melodies and harmonies of worship.  After an inspiring message by Pastor Conatser they had a time of prayer for the sick at the front of the auditorium.  It was life-changing.

Over the next 25 years I attended hundreds of services like that in Pentecostal and Charismatic churches.  It was an incredible experience to hear people singing in the spirit, or to see the minister throw his notes aside and go a completely different direction as the Spirit of God began moving.  It was amazing to see the power of God falling to the point that people couldn’t stand.  The fastest growing churches in the country were the ones emphasizing the ministry of the Holy Spirit.  People were hungry for God, and were tired of the formalism they found in their traditional denominational churches.

On the heels of the Charismatic Renewal of the 60s and early 70s came the Word of Faith movement, which some have referred to as the third wave (the first wave being the Pentecostal movement of the early 20th century and the second wave being the renewal in Anglican and Catholic churches in the 1960s).  That was followed by the Holy Laughter movement that began in Florida in 1993.

Somewhere along the line that all changed, however.  In the early 2000s a number of things occurred to bring about a new style of church service. 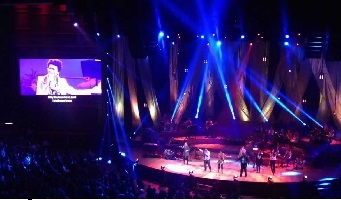 When the Charismatic Movement hit in full force in the 1980s, denominational churches were losing members in such large numbers that they had to either change or close their doors.  Today the same thing has happened with the Charismatic churches.  They have felt pressured into adjusting to the new paradigm of worship.

These days there is very little difference between Charismatic and non-Charismatic denominational churches for all practical purposes.  Doctrine is emphasized less and presentation is emphasized more.  For the most part the teaching that you hear in a Charismatic church would sound perfectly normal in a progressive Baptist, Methodist, Assembly of God, or Presbyterian church.  The prevailing emphasis is on formula.  Follow the formula and your church will grow.

In the last few years we’ve seen megachurch pastors endorse gay marriage and reject essential Christian doctrines in the name of inclusiveness and tolerance.  We’ve seen the gospel redefined as helping people to find fulfillment by realizing their God-given potential.  When did we go from giving people what they need to giving them what they want?  When did we decide that Madison Avenue was a better model for church growth than the book of Acts?  I have nothing against megachurches.  I’ve attended a few and felt right at home, but their growth came about because they were proclaiming the truths of God’s Word, not sidestepping them.  If a church has 100,000 members but they don’t preach the gospel and produce genuine conversions what have they accomplished other than making a name for the pastor?

You may recall that Jesus actually weeded out people who were following Him for the wrong reasons.  He had them narrowed down to a handful who ended up turning the world upside down with the gospel.  God can do more with small numbers of people who follow the truth than with a hundred megachurches who water everything down so as not to offend.

I’m no prophet, but I’ve been around awhile and I’ve seen a few trends come and go, and it’s my belief that in a few years people will tire of these formulas and hunger for a genuine move of God where all of the elements – repentance, manifestations of the gifts of the Spirit, discipleship, prayer, and doctrine – can come together in one tremendous force for the Kingdom of God.

“Another parable He put forth to them, saying: “The kingdom of heaven is like a man who sowed good seed in his field;  but while men slept, his enemy came and sowed tares among the wheat and went his way.  But when the grain had sprouted and produced a crop, then the tares also appeared.  So the servants of the owner came and said to him, ‘Sir, did you not sow good seed in your field? How then does it have tares?’  He said to them, ‘An enemy has done this.’ The servants said to him, ‘Do you want us then to go and gather them up?’  But he said, ‘No, lest while you gather up the tares you also uproot the wheat with them.  Let both grow together until the harvest, and at the time of harvest I will say to the reapers, “First gather together the tares and bind them in bundles to burn them, but gather the wheat into my barn.”’ (Mat. 13:24-30)

While this is primarily talking about the end of the age, the principle also applies to today.  When the Spirit of God begins moving in the church, the enemy comes in and tries to put a stop to it through corruption, fanaticism, or false doctrine.  The church’s tendency is to withdraw, rather than to deal with the mess that revival usually brings.  When they do that, revival ends.

What the church needs isn’t a formula.  We need a genuine move of the Holy Spirit, but we also need mature believers who are prepared to take the leadership in addressing the inevitable problems that arise so that the move can be sustained and bear the fruit that God wants to see.

If we want to see genuine revival we must first have a fresh revelation of what the gospel is, what the church is all about, and what we’re supposed to believe as followers of Jesus.  This will make people uncomfortable, no doubt.  Many will turn away, but that’s okay.  Many turned away from Jesus shortly before the fire of the Holy Spirit fell on the believers at Pentecost, and that changed the world.  If we want to change the world for Jesus today we’ll have to be willing to do it His way and endure a little pruning.  The market-driven church will change churches, but the Spirit-led church will change hearts, lives, and cultures for the glory of God.

What’s Up, Doc?
10 Claims About Speaking in Tongues

One thought on “The Market-Driven Church”