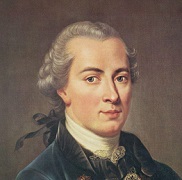 Immanuel Kant (1724-1804) was one of the most influential figures in the history of Western philosophy, and is considered the center of modern philosophy. He wrote on religion, law, ethics, astronomy, and history, and his contributions had a profound impact on almost every philosophical movement that followed him.

Kant was born into a family of modest means. His father and father-in-law were saddle and harness makers.  Kant’s parents were Pietists (a movement within Lutheranism with Puritan characteristics) and he attended a Pietist school, the Collegium Fridericianum, prior to entering the University of Konigsberg where he would remain as a student and eventually a professor.

In his major work entitled The Critique of Pure Reason, he sought to move beyond the failures of traditional philosophy and metaphysics, and to explain the relationship between reason and human experience. Kant was opposed to the wild speculation and theories of human experience which was so common in the world of philosophy, and is credited with having synthesized rationalism and empiricism.

Kant asserted that nobody could know whether there is a God and an afterlife or not because of the absence of irrefutable evidence. However, he also opposed skepticism and stated that people are justified in believing in God even though they had no empirical evidence.