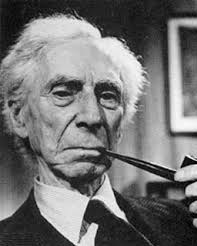 Bertrand Russell (1872–1970) was a British philosopher, logician, and political activist.  As one of the founders of analytic philosophy, he is considered one of the most influential thinkers of the 20th century.  Russell published numerous books on logic, the theory of knowledge, and related topics.  Over his career he made revolutionary contributions in the fields of mathematics and logic. Despite his many accomplishments in these fields, he is remembered by many for his liberal views on politics and religion.

Russell was the grandson of Lord John Russell, who had twice served as Prime Minister under Queen Victoria. He was raised by his grandmother Lady Russell following the loss of both parents and Lord Russell as a child.  As a result he received a first rate education both in mathematics and in the moral sciences.

During 1960s, Russell became an inspiration to many idealistic young people because of his anti-war and anti-nuclear protests. The Russell-Einstein Manifesto, written along with the famous physicist Albert Einstein in 1955, called for an end to nuclear proliferation. He became the founder of the Campaign for Nuclear Disarmament in 1958, and was imprisoned briefly in 1961 at the age of 88.  He remained active on political issues until he passed away in 1970 at the age of 97.