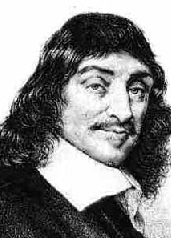 René Descartes (1596-1650) was a French mathematician and philosopher.  He has been dubbed the “Father of Modern Philosophy”, but he was also one of the key figures in the Scientific Revolution of the 17th Century, and is sometimes considered the first of the modern mathematicians.  His book Meditations on First Philosophy is included in the curriculum at most university philosophy departments.

As a young man, he found employment for a time as a soldier, but after meeting the Dutch philosopher and scientist Isaac Beeckman he realized that his calling in life was the pursuit of true wisdom and science.  Descartes soon came to the conclusion that the key to philosophy was to build it on the indisputable facts of mathematics.  He moved from the restrictions of Catholic France to the more liberal environment of the Netherlands, where he spent most of his adult life, and where he worked on his vision of merging algebra and geometry.

For all his importance in the development of modern mathematics, though, Descartes is perhaps best known today as a philosopher who espoused rationalism and dualism. His philosophy consisted of a method of doubting everything, then rebuilding knowledge from the ground, and he is particularly known for the often-quoted statement “Cogito ergo sum”(“I think, therefore I am”). He also had an influential role in the development of modern physics, and his work had a profound impact on Isaac Newton.  He provided the first distinctly modern formulation of laws of nature and a conservation principle of motion, made numerous advances in optics and the study of the reflection and refraction of light, and constructed what would become the most popular theory of planetary motion of the late 17th Century. His commitment to the scientific method was met with strident opposition by the church officials of the day.