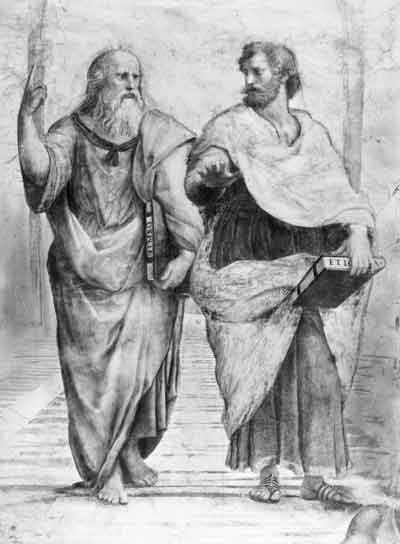 Ancient Greek philosophy arose in the 6th century BC and continued throughout the Hellenistic period and the period in which Ancient Greece was part of the Roman Empire. It dealt with a wide variety of subjects, including political philosophy, ethics, metaphysics, ontology, logic, biology, rhetoric, and aesthetics.  The Ancient Greek philosophers have played a pivotal role in the shaping of the western philosophical tradition. They broke away from a mythological approach to explaining the world, and initiated an approach based on reason and evidence instead. Initially concerned with explaining the entire cosmos, the Pre-Socratic philosophers strived to identify its single underlying principle. Their theories were diverse and none achieved a consensus, yet their legacy was the initiation of the quest to identify underlying principles.

This sparked a series of investigations into the limit and role of reason and of our sensory faculties, how knowledge is acquired and what knowledge consists of. Here we find the Greek creation of philosophy as “the love of wisdom,” and the birth of metaphysics, epistemology, and ethics. Socrates, Plato, and Aristotle were the most influential of the ancient Greek philosophers, and they focused their attention more on the role of the human being than on the explanation of the material world. The work of these key philosophers was succeeded by the Stoics and Epicureans who were also concerned with practical aspects of philosophy and the attainment of happiness. Other notable successors are Pyrrho’s school of skepticism and the Neoplatonists such as Plotinus who tried to unify Plato’s thought with theology.

The period of philosophy prior to that of Socrates is know as the Pre-Socratic era.  They’re sometimes referred to as natural philosophers (as opposed to supernatural explanations provided by mythology), and they are credited with laying the foundations for the work of Socrates, Plato, and Aristotle as well as Galileo, Isaac Newton, and other giants in the world of science.

Socrates was a classical Greek philosopher, and is considered the father of western philosophy.  His most famous student was Plato.  The main focus of his teachings was how to live a good and virtuous life.  His most famous quote was “an unexamined life is not worth living”.

A classical Greek philosopher who studied under Socrates, Plato expanded on Socrates’ work in his writings called “dialogues”.  Much of what we know about Socrates came from Plato.  His most famous student was Aristotle.

Also a classical Greek philosopher, Aristotle spent twenty years at Plato’s academy in Athens as both a student and a teacher.  Aristotle wrote extensively on biology, medicine, physics, and metaphysics.  His most famous student was Alexander the Great.