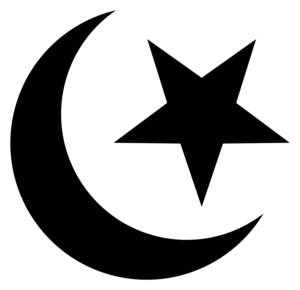 Islam is the world’s second largest religion with more than 1.5 billion adherents worldwide. It’s the dominant religion in eastern and northern Africa, in the larger Middle East, in south central Asia, and in Indonesia.  Most Muslims are either Sunni (approximately 80%) or Shia (approximately 15%). About 13% of Muslims live in Indonesia, 25% in South Asia, 20% in the Middle East, and 15% in Sub-Saharan Africa. Large Muslim communities are also found in Europe, China, Russia, and the Americas.  Islam was founded by the prophet Mohammed in the seventh century.  It is the fastest growing major religion, and converts and immigrant communities are found in almost every part of the world.

The word “Islam” is best translated as “submission”, meaning submission to the will of God. There are some who believe that the name came from the Arabic word for peace – salam, or the word for safety and security – salama.  In fact it’s more likely that it comes from the word for surrender – istaslama.

Muslims believe the Quran (or Koran) was verbally revealed by God to Muhammad through the angel Gabriel gradually over a period of about 23 years.  It is considered the last in a series of divine messages that started with those revealed to Adam. Muslims consider the Quran to be the only revealed book that has been protected by God from corruption.

In Islam there is only one god, although there are other supernatural beings, like Satan and angels. The religion is defined by the Quran and a large collection of scriptures from other sources. To the latter group belongs especially the hadiths (acts and sayings of Muhammad and other early Muslims), early theological works, law scriptures (Sharia) and commentaries which are still being produced.

Islam is defined out of the following, known as the 5 pillars:

Sunni – The largest branch of Islam.  Sunnis believe that Mohammed’s first four successors (or “caliphs”) rightfully took his place as the leaders of Muslims.  (Think of them as the Protestants.)

Shia – The minority branch currently centered in Iran, Iraq, and Lebanon.  Shias believe that only the heirs of the fourth caliph named Ali are the legitimate successors of Mohammed.  They viewed the Ayatollah Khomeini, who came to power in Iran in 1978, as the first legitimate religious figure in a thousand years. (Think of them as the Catholics who consider themselves the sole link to the prophet.)

Ibadi – A small branch located in Oman, Zanzibar and eastern Africa.  It’s the most tolerant and moderate branch.  (Think of them as the Orthodox branch.  They also trace themselves  back to Mohammed, but they’re not so militant about it.)

Within mainstream Islam, there are 3 levels:

Ibrahim (Abraham in Judaism & Christianity) has a central place in the history of Islam, and is the founder and builder of the Ka’ba in Mecca, which is by Islam defined as the center of the world.  The teaching of Islam is that there is only one God. For this reason Muslims have historically shown respect for both Christians and Jews, who are also monotheistic and trace their roots to Abraham.

While there is no explicit message of love in Islam in the same sense as it is found in parts of the Christian Gospels, Islam is still a religion that exhibits the same care for man as found in Christianity and Judaism. There are numerous passages in the Koran where God expresses his compassion for man.

The most central issue in Islam is the responsibility towards the community. The Koran and the Sunna contains many rules on how to act in life, what to do and what not to do. The core of Islam is the family, the extended family, and from this, society is understood as concentric circles. There are no obligations on the Muslims towards people who are not Muslims, Jews or Christians.

In Islam, humans are understood as secured a place in Paradise, provided they live according to the regulations of Islam. Most Muslims abstain from claiming that they are guaranteed a place in Paradise. Islam has a Day of Judgment, but this does not play a central part in neither belief nor theology. This day will be the day when all dead are reawakened, either to be condemned or let into Paradise. There are no reasons to consider the Muslim Paradise as a place where men will enter more easily than women, but when life in Paradise is described this is in most, but not all, cases described on male conditions. Most learned Muslims consider the descriptions of Paradise as symbolic, and consider Paradise as something that man on earth cannot apprehend.

Due to the controversial subject matter, two videos are provided to present different viewpoints on Islam.