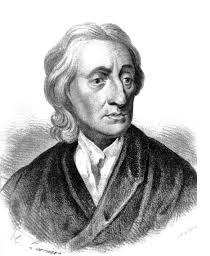 John Locke (1 632-1704) was one of the most famous philosophers and political theorists of the 17th century.  He is considered the father of Classic Liberalism, and one of the three founders of British Empiricism.  He made great contributions to modern theories of limited government, as well as the areas of theology, religious toleration, and educational theory.  He used a theory of natural rights to argue that governments have obligations to their citizens, should have only limited powers over their citizens, and should be overthrown by their citizens under certain circumstances.  These views were influential in the writing of the Declaration of Independence and the U.S. Constitution.  According to Locke, political power is the natural power of each man collectively given up into the hands of a designated body.  The community has a moral obligation to revolt against or otherwise replace any government that forgets that it exists only for the people’s benefit. Locke also believed that determining the proper role of government would allow humans to flourish as individuals and as societies, both materially and spiritually.

Locke argues that God gave us our capacity for reason to aid us in the search for truth. As God’s creations, we know that we must preserve ourselves. To help us, God created in us a natural aversion to misery and a desire for happiness, so we avoid things that cause us pain and seek out pleasure instead. We can reason that since we are all equally God’s children, God must want everyone to be happy. If one person makes another unhappy by causing him pain, that person has rejected God’s will. Therefore, each person has a duty to preserve other people as well as himself. Recognizing the responsibility to preserve the rights of all humankind naturally leads to tolerance, the notion that forms the basis for Locke’s belief in the separation of church and state. If we all must come to discover the truth through reason, then no one man is naturally better able to discover truth than any other man. For this reason, political leaders do not have the right to impose beliefs on the people. Because everything we understand comes through experience and is translated by reason, no outside force can make us understand something in conflict with our own ideas. Locke insists that if men were to follow the government blindly, they would be surrendering their own reason and thus violating God’s law, or natural law.

The right to private property is the cornerstone of Locke’s political theory, encapsulating how each man relates to God and to other men. Locke explains that man originally exists in a state of nature in which he need answer only to the laws of nature. In this state of nature, men are free to do as they please, so long as they preserve peace and preserve mankind in general. Because they have a right to self-preservation, it follows that they have the right to those things that will help them to survive and be happy. God has provided us with all the materials we need to pursue those ends, but these natural resources are useless until men apply their efforts to them. For example, a field is useless until it produces food, and no field will produce food until someone farms it.

Locke proposes that because all men own their bodies completely, any product of their physical labor also belongs to them. Thus, when a man works on some good or material, he becomes the owner of that good or material. The man who farms the land and has produced food owns the land and the food that his labor created. The only restriction to private property is that, because God wants all his children to be happy, no man can take possession of something if he harms another in doing so. He cannot take possession of more than he can use, for example, because he would then be wasting materials that might otherwise be used by another person. Unfortunately, the world is afflicted by immoral men who violate these natural laws. By coming together in the social–political compact of a community that can create and enforce laws, men are guaranteed better protection of their property and other freedoms.