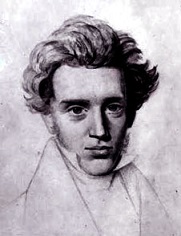 Søren Aabye Kierkegaard (1813 – 1855) was a profound and prolific writer in the Danish “golden age” of art and intellectualism. His work crosses encompassed philosophy, theology, psychology, literary criticism, devotional literature and fiction. Kierkegaard utilized his skills in an effort to revitalize the Christian faith of 19th century Europe, while also making many contributions to each of the fields in which he worked. Through his efforts in the field of philosophy he became known as the “father of existentialism”.

Born to a prosperous Danish family and educated at Copenhagen, Kierkegaard developed a reputation as a frivolous, witty conversationalist but privately he suffered from depression. In a series of books, Kierkegaard attacked the literary, philosophical, and ecclesiastical establishments of his day, including the prevailing idealism of the German philosopher Hegel.

Primarily a philosopher, he sought continually to best determine how life ought to be lived. He used the terms “existential” and “existentialism” in relation to his philosophy.  His view was that life was subjective and ambiguous.  In Kierkegaard’s view individuals must be prepared to defy the accepted practices of society, in order to live a meaningful life.  He died at the age of 42, leaving thirty books and numerous journals of his work.