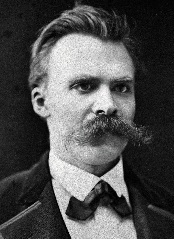 Friedrich Wilhelm Nietzsche (1844–1900) was a German philosopher in the 19th century known for his views on perspectivism ( a rejection of absolute truth), the will to power (ambition is the driving force for man), the death of God (Christian values are no longer the most credible source for morality), the Übermensch (“Superman”, or “Overman” – the view that purpose is found in how one impacts this world for future generations, rather than in how one prepares for the afterlife), and eternal recurrence (the view that the universe will continue to recur an infinite number of times across infinite time or space). His most famous quote is probably “That which does not kill us makes us stronger”.  Nietzsche considered religion and morality to be flawed human creations.  His concept of “Life Affirmation” is one of the key tenets of his philosophy.  It teaches that man should embrace the realities of the world we live in instead of the idea of a world beyond.  Nietzsche is often associated with his views of nihilism, which he expressed as freeing life of meaning, purpose, comprehensible truth, or essential value.

Nietzsche studied theology at the University of Bonn, but eventually moved to Leipzig where his interests gravitated toward philosophy.  At the age of 24 he became a professor at the University of Basel in Switzerland.  where he taught from 1869-79 before being forced to retire for health reasons.  While in Basel Nietzsche became close friends with the famous German classical composer Richard Wagner.

In 1889 he suffered a mental breakdown, and was committed to an asylum before being placed in the care of his family.  His health continued to deteriorate, and he died in 1900.