The Eastern Orthodox Church (a.k.a. the Orthodox Church) is the third largest branch of Christianity with approximately 250 million adherents.  The majority live in Eastern Europe, the Balkans, the Caucasus and the Middle East. One of the oldest religious organizations in the world, it has had a profound impact on European and Near Eastern culture.  The Orthodox Church teaches that it is the continuation of the One, Holy, Catholic and Apostolic Church established by Jesus Christ in his Great Commission to the apostles, and practices what it believes to be the original faith passed down from the Apostles.

The five most important cities for the early church were Antioch, Alexandria, Constantinople, Jerusalem and Rome.  Antioch was one of the first cities to receive the gospel, and it was there that believers were first referred to as Christians (Acts 11:26). The church in Alexandria, Egypt was founded by John Mark (St. Mark, the author of the gospel of Mark) in 42 AD.  Constantinople  (modern Istanbul) became the capital of the Emperor Constantine’s pro-Christian empire.  Jerusalem of course, was the scene of Jesus’ ministry and the location of his crucifixion, resurrection, and ascension. And Rome is where the Apostles Paul and Peter were martyred under Nero. 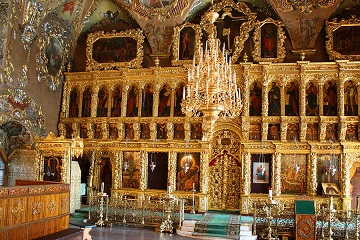 The prominence of these cities made them natural choices for administrative centers for the church following the edict of toleration in 313 AD.  In 325 AD Constantine called the Council of Nicaea for the purpose of resolving theological disputes, resulting in the Nicene Creed. There at Nicaea it was determined that Antioch, Alexandria and Rome were the three greatest centers of Christianity.  In 381 AD the second ecumenical council was held in Constantinople, making Constantinople a patriarchate (a jurisdiction of a high-ranking bishop) assigning to it the next highest status following Rome.

With the exception of Rome, all of these cities came under Muslim control as Islam quickly spread westward in the 7th century.  As a result, the influence of Christianity declined in these regions.

In 1054 a power struggle between Rome and the other four major city’s churches led to “The Great Schism”, when the patriarch of Rome claimed supremacy over the entire church.  This led to the formation of what we know today as the Roman Catholic Church, and the four remaining churches and the churches in their sphere of influence became known as the Eastern Orthodox Churches.

In 1099 crusaders from western Europe captured Jerusalem, but in 1187 they were conquered and Jerusalem came under Muslim control again.  When Constantinople fall to the Ottomans in 1453 the seat of the Eastern Orthodox Church moved from Constantinople to Russia.  Following the fall of the Ottoman Empire a century ago, the majority of the Eastern Orthodox Church soon came under the control of the Soviet Union until its collapse in 1989.  Churches such as Alexandria, Egypt that were outside of the reach of the Soviets experienced growth over the last two centuries due to evangelistic efforts from the West.  Since the dismantling of the Soviet Union a quarter of a century ago the Orthodox Church has experienced a resurgence worldwide. 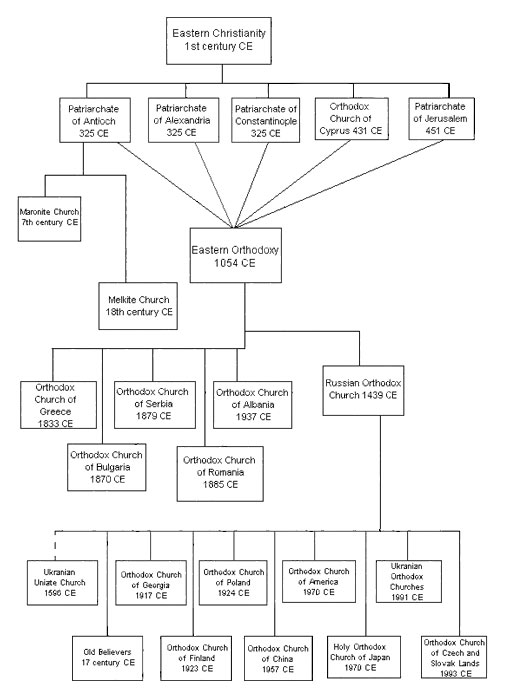 Eastern Orthodoxy believes:
1. That there are three Divine Persons in God, distinct, yet equal.
2. That the Father is the head of the Trinity, neither begotten, nor proceeds from anyone.
3. That the Son is begotten from the Father, of the very same essence (omo’ousios) of the Father. He is God and also truly Man like us, because He assumed human nature from the Blessed Virgin Mary, except for sin. He died on the Cross to save mankind, and He ascended into Heaven. He will come again to “judge the living and the dead”.
4. That the Holy Spirit proceeds from the Father.
5. That the world is not self-created but is the work of one God.
6. That there are Seven Sacraments: Baptism, Holy Chrismation, Holy Eucharist, Holy Confession, Ordination, Marriage, and Holy Unction.
7. That no one can be saved unless he is baptized.
8. That the Holy Scriptures and Holy Tradition are of equal value, and that they complete each other.
9. That God assigned to every man an Angel to guide and help him.
10. That after death, man’s body goes to earth, and the soul, which is immortal, is presented before God and, according to its actions, pre-enjoys happiness or pre-suffers punishment until the General Judgement.
11. That of all saints, the Mother of God has a supreme grace, and that the veneration given to icons and relics relates not to the sacred images as such, but to the person whom they represent.
12. That God knows which road man will take, but He does not predestine him.