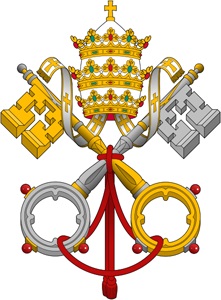 The Roman Catholic Church (a.k.a. The Catholic Church) is the largest branch of Christianity with more than 1.2 billion members worldwide, and is one of the oldest religious institutions in the world. Overseeing the church is the Bishop of Rome (a.k.a. the Pope). The church’s principal doctrines are summarized in the Nicene Creed and the Apostle’s Creed.  Among its distinguishing features are its belief in the supremacy of the Pope and celebration of the seven sacraments. In Catholicism, Jesus designated Peter as the “rock” upon which His church will be built.  The Catholic Church teaches that it is the one true church founded by Jesus Christ, that its bishops are the successors of Christ’s apostles, and that the Pope is the successor to Saint Peter. The Church maintains that the doctrine on faith and morals that it presents as definitive is infallible.

The sacraments are integral to Catholic liturgical worship. The principal sacrament is the Eucharist, also called the Mass. The Church teaches that in this sacrament the bread and the wine consecrated by the priest become the body and the blood of Christ, a change it calls transubstantiation. The Catholic Church practices closed communion and only baptized members deemed to be in a state of grace, free of unforgiven mortal sin or penalty, are ordinarily permitted to receive the Eucharist. 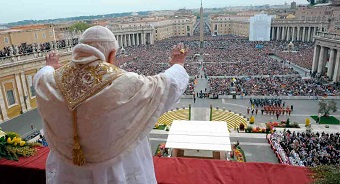 The Church venerates Mary, the mother of Jesus Christ, teaching that through divine intervention she gave birth to him while still a virgin. It has defined four specific Marian dogmatic teachings: her Immaculate Conception without original sin, her status as the Mother of God, her perpetual virginity and her bodily Assumption into Heaven at the end of her earthly life.

After Jesus was crucified He descended into the underworld and  granted salvation to souls by the Harrowing of Hell (the triumphant descent into the realm of the dead). Catholicism teaches that immediately after death each person’s soul will receive a particular judgment from God, according to their faith in Christ and their sins. This teaching also attests to another day when Christ will sit in a universal judgment of all mankind. According to the church’s teaching, this final judgment will end human history and bring a new heaven and earth ruled by God in righteousness.

Catholicism teaches that a soul may enter one of three states of afterlife:

The Catholic Church views baptism as the first of three sacraments of initiation for Christians. It washes away both original sin and personal sins. It is conferred even on children, who need it on account of original sin.

The Catholic Church views the sacrament of confirmation as required to make the grace given in baptism complete. Confirmation is usually given immediately after an adult is baptized.

The Sacrament of Penance exists for the conversion of those who separate themselves from Christ by sin after they are baptized.  Mortal sins must be confessed within a year at the most, and must be before receiving Holy Communion.  The priest is sworn to absolute secrecy about any sins revealed to him in confession.

In 1517 AD a priest named Martin Luther tacked his Ninety-Five Theses to the door of the church at Wittenberg, Germany to protest key points of Catholic doctrine and the sale of indulgences. In Switzerland, Huldrych Zwingli, John Calvin, and other Protestant Reformers also offered criticism, thus prompting the Protestant Reformation.  The English Reformation during the reign of Henry VIII began as when the pope denied Henry an annulment of his marriage to Catherine of Aragon.  As a result, he had the Acts of Supremacy passed, making him head of the English Church.  The Council of Trent (1545–1563) was a response to the Protestant movement that reaffirmed central Catholic teachings.

Because  of the controversial nature of the Catholic Church we are providing videos that provide contrasting viewpoints.