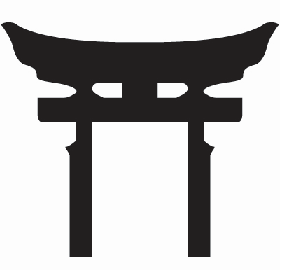 Shinto is a practice of religious rites based on the Japanese polytheistic idea of kami (deity). It is the religion of 80% of Japan, and has 100,000 shrines along with 78,890 priests within the country.  The word “Shinto” literally means “Way of Kami.” Scholars often maintain that it is the indigenous religion of Japan. Although Shinto has no obvious foreign origin, there have been Korean and Chinese influences in its development.

Shinto has no holy scriptures in the strict sense, but the mythologies collected in Japanese classics such as Kojiki (the Record of Ancient Matters ), compiled in 712, and Nihonshoki (also known as Nihongi, the Chronicles of Japan ), compiled in 720, are regarded as important texts. In many cases, the mythologies have political implications to justify the rule of the emperor, but they also have cosmological implication.

The Japanese people have been practicing Shinto alongside Buddhism for centuries.  Although there are some similarities, a clear distinction is made between Shinto and Buddhism. Generally, Shinto concerns happiness and prosperity in this world, whereas Buddhism, for the Japanese, relates to the peace of deceased souls.

A special ritual called jichinsai (Earth-pacifying ritual) is almost always performed by Shinto priests when construction begins on a new building or facility. It is believed that, without such a ritual, accidents may happen because the deities or spirits that dwell on the construction site become angry.

Vitalism. The scholar Motoori Norinaga (1730–1801) once defined kami as whatever seems strikingly impressive, possesses the quality of excellence, or inspires a feeling of awe. Certainly Shinto includes an animistic view of nature, but Shinto has a more distinctive characteristic. The kami enshrined in a Shinto shrine varies from a deity that appears in the mythologies in Kojiki or Nihonshoki to the spirit of a historical figure such as an outstanding emperor, feudal lord, or scholar. However, the kami is always believed to have mysterious power to create, enrich, prolong, or renew any form of life.

In other words, what the kami symbolizes is vitality, productivity, or fertility in this world. Shinto vitalism has roots in agricultural rites that may date back to the third or fourth centuries b.c.e. Even in modern times, people pray to kami for worldly happiness, prosperity, success, safety, or health.

Ritualism. In Shinto tradition, performing and participating in rituals has been given greater emphasis than believing and confessing a certain creed. Although theological treatises of Shinto were written as early as the thirteenth century, no established creed or orthodox dogma ever developed. It is more likely that the articulation of principles was intentionally eschewed than that Shinto failed to establish creed or dogma. Some rituals, such as the Niinamesai (Feast of New Rice Crops), which is performed by the emperor himself, are considered to be so sacred that the entire procedure and even the name of the kami involved are kept secret.

According to surveys, only a small percentage of Japanese confess that they believe in Shinto, but the majority of them visit a Shinto shrine on New Year’s Day. Such data provoke some scholars to maintain that Shinto is a cultural custom rather than a religion.

However, State Shinto is an exceptional case. From 1871 to 1945, Shinto was the Rite of State, also called State Shinto. Toward the end of World War II, the sacredness and invincibility of Japan as the nation of kami, was so strongly believed that State Shinto became fanatical, leading many Japanese soldiers to suicidal attacks. Yasukuni Shrine in Tokyo enshrines the spirits of the soldiers who died for Japan and the emperor, not as souls of the dead but as kami (i.e., deities that have power to give vitality).

Particularism. Shinto is a national religion practiced only by the Japanese, including Japanese immigrants in other countries. With few exceptions, Shinto has had no interest in overseas missions or in universal principles or values that are considered valid for all human beings. Scholars of Shinto tend to emphasize the “uniqueness” of Shinto rather than its universality. Each kami enshrined in a local shrine is supposed to concern only the people in the local community. This particularism also originates in Shinto’s development from agricultural rites focusing on the sacredness of the particular water source of each local community. Nonetheless, when Japan annexed Korea in the early twentieth century, the Japanese government built Shinto shrines in Korea and forced Korean people to worship Shinto kami.