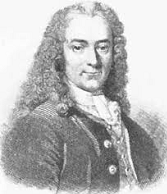 François-Marie Arouet Voltaire (1694–1778) was a French Enlightenment writer, historian, and philosopher famous for his wit, his attacks on the established Catholic Church, and his advocacy of freedom of religion, freedom of expression, and separation of church and state. Voltaire was a versatile writer, producing works in almost every literary form, including plays, poems, novels, essays, and historical and scientific works. In 1704, Voltaire began to show promise as a writer while receiving a classical education at the Collége Louis-le-Grand, a Jesuit secondary school in Paris.  He wrote more than 20,000 letters and more than 2,000 books and pamphlets.

He was an outspoken advocate, despite the risk that this placed him in under the strict censorship laws of the time. As a satirical polemicist, he frequently made use of his works to criticize intolerance, religious dogma, and the French institutions of his day.  Voltaire was exiled to Tulle in 1715. Two years later, in 1717, he returned to Paris, only to be arrested and exiled to the Bastille for a year. He was sent to the Bastille again in 1726, before being shipped off to England. In 1733, he fled to Lorraine, and in 1759, he wrote the satirical novella Candide.

Voltaire’s works fall into four categories: poetry, plays, historical works and philosophical works. His most well-known poetry includes the epic poems Henriade (1723) and The Maid of Orleans, which he started writing in 1730, but never fully completed.  Among the earliest of Voltaire’s best-known plays is the tragedy Oedipus, which was first performed in 1718. Voltaire followed Oedipus with a string of dramatic tragedies, including Mariamne (1724). His Zaïre (1732), written in verse, was something of a departure from his previous tragedies. Until that point, Voltaire’s tragedies had centered on a fatal flaw in the protagonist’s character; the tragedy in Zaïre was the result of circumstance. Following Zaïre, Voltaire continued to write tragic plays, including Mahomet in 1736 and Nanine in 1749.  Voltaire’s body of writing also includes the notable historical works The Age of Louis XIV (1751), and Essay on the Customs and the Spirit of the Nations (1756). In Essay on the Customs and the Spirit of the Nations, Voltaire took a unique approach to tracing the progression of world civilization by focusing on social history and the arts.

Voltaire’s popular philosophic works took the form of the short stories Micromégas (1752) and Plato’s Dream (1756), along with his famed satirical novella Candide (1759). In 1764, he published another of his most important philosophical works, Dictionnaire Philosophique, an encyclopedic dictionary embracing the concepts of Enlightenment and rejecting the ideas of the Roman Catholic Church.

In 1715, Voltaire was exiled to Tulle for mocking the regent Orleans. In 1717, he returned to Paris, only to be arrested and exiled to the Bastille for a year on charges of writing libelous poetry. Voltaire was sent to the Bastille again in 1726, for arguing with the Chevalier de Rohan. He was detained there for two weeks before being shipped off to England, where he would remain for the next three years.

In 1733, the publication of Voltaire’s Letters on the English Nation angered the French church and government, forcing the writer to flee to Lorraine. He remained there for the next 15 years with his mistress, Emile de Breteuil, at the Château de Cirey, visiting Paris occasionally as of 1735, when he was granted re-entry. By 1778, the French public had begun to regard Voltaire as a literary genius, and he returned to Paris a hero.

Two months before his death, the ailing Voltaire bid the crowd farewell at a production of his play Irene, stating “I die adoring God, loving my friends, not hating my enemies, and detesting superstition.” Voltaire died in his sleep on May 30, 1778, in Paris, France.