Having addressed the plagiarism allegations, let’s move on to the subject of Kenneth Hagin’s theology.  Did he take it from Kenyon?

First of all, let’s review some important facts about Kenneth Hagin’s youth and young adulthood.  He was born with a deformed heart and an incurable blood disease.  He was bedfast and his doctors had given him up to die when a few days before he turned seventeen he acted on the revelation he had received about Mark 11:23,24 and received complete healing. 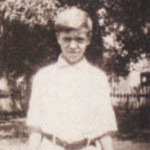 He was raised as a Baptist, was saved at the age of fifteen, healed at the age of sixteen, and began preaching in Baptist churches at nineteen.  He soon came across people of the Pentecostal persuasion, seeking some fellowship with others who believed in divine healing.  Before long he became persuaded that the baptism in the Holy Spirit and speaking in tongues did not end with the deaths of the apostles, and he sought and received the baptism for himself.  Shortly thereafter things came to a head with his Baptist overseers, and he was kicked out of their denomination which he always jokingly referred to as “receiving the left foot of fellowship” (a twist on Galatians 2:9 concerning Peter, James, and John extending the right hand of fellowship to Paul and Barnabas).

At that point he joined the Assemblies of God, a Pentecostal denomination formed in 1914, three years before he was born.  Being a young pastor (21 at this point) who was new to the Pentecostal world, he turned to Mom and Pop Goodwin who pastored in a neighboring town in 1938, and who were also members of the Assemblies of God in Texas.  They mentored him and introduced him to the writings of Smith Wigglesworth, an Assembly of God preacher from the UK whose meetings they had attended.  Brother Hagin started reading every book that Wigglesworth wrote, and although he never met him he felt a great sense of loss when Wigglesworth passed away in 1947.  Through the Goodwins Brother Hagin was also introduced to the ministries of people like Raymond T. Richey, F. F. Bosworth, P. C. Nelson, Howard Carter, and Dr. Lilian B. Yeomans.  All of these people were Pentecostal.

In twelve years of pastoring Brother Hagin taught people about healing and prayed for many people who received healing for various conditions.  In all his years of pastoring he never buried a church member.  (Brother Hagin was quick to point out that these were small churches and he had the time to minister to anybody who was sick, and that a pastor of a larger church wouldn’t be able to do that.)  The gifts of the Spirit were in operation in his ministry, and many times he would know things about his church members through the word of knowledge.

In 1949 God called him into a traveling ministry, so he resigned from his last pastorate and began speaking in other Assembly of God churches in Texas and its neighboring states.  One year later somebody asked Brother Hagin if he had ever heard of a man by the name of E. W. Kenyon.  He told them that he had not.  They replied that Kenyon taught faith and confession just like Brother Hagin (this alone should tell you that Brother Hagin didn’t take his teaching on faith and confession from Kenyon, since he was already teaching these things before he ever heard of Kenyon), and he gave him some of Kenyon’s books.  Upon reading them he discovered that the man was right.  Brother Hagin talks about this in the introduction to his book The Name of Jesus.

Mr. Kenyon went home to be with the Lord in 1948. It was 1950 before I was introduced to his books. A brother in the Lord asked me, “Did you ever read after Dr. Kenyon?”  I said, “I’ve never heard of him.”  He said, “You preach healing and faith just like he does.”  He gave me some of Kenyon’s books. And he did preach faith and healing just like I do.

Since Kenyon passed away in 1948, he had been gone for two years before Brother Hagin ever heard of him.  He had already pastored for twelve years and had been grounded in Pentecostal theology, faith, healing, and confession before he ever read any of Kenyon’s material.  However, Brother Hagin liked the way that Kenyon stated things and began to incorporate some of that into his teaching and preaching.

Kenyon was a very articulate man.  He wanted to be an actor when he was young, and had attended the Emerson School of Oratory in Boston to study theater.  Because of his background he had a way with words and a distinctive presentation.  He wasn’t Pentecostal (at least not a practicing one) and he was from New England, so most of the Pentecostal people in Texas who Brother Hagin knew weren’t familiar with him.

I’ve said all of this to establish the fact that Kenneth Hagin’s theology was developed initially as a Baptist teenager who sought and received healing by believing and acting on Mark 11:23,24, and as an Assembly of God pastor from 1938-1949.  While he did adopt some of Kenyon’s views on issues like the atonement and the name of Jesus, his views on other issues were already developed.  It’s a big stretch to say that Kenyon, a Baptist minister who didn’t speak in tongues or consider speaking in tongues the evidence of the baptism in the Holy Spirit (the prevailing view among Pentecostals like Brother Hagin) was the true father of the WoF movement because Kenneth Hagin quoted him at length and subscribed to some of his unorthodox views.  When I was at Rhema Brother Hagin told us that he didn’t agree with everything that Kenyon taught, but some of the things Kenyon said were a blessing to him.  That’s why he quoted him as much as he did.

Undoubtedly the biggest influences on his theology were the Goodwins and the writings of Smith Wigglesworth and other well known Pentecostals of that day.

In Mountain Moving Faith he quoted F. F. Bosworth saying “Most Christians feed their body three hot meals a day and their spirit one cold snack a week. And they wonder why they’re so weak in faith.”  In Understanding the Anointing he said of Bosworth:

“Our RHEMA Bible Training Center students all have read F. F. Bosworth’s classic book, Christ the Healer. I knew Bosworth. I’ve talked to him personally. He was 77 years old the last time I talked to him, but you’d have thought he was 55 just to look at him.“

Christ the Healer was published in 1924, and it includes many of the same principles that Brother Hagin taught throughout his ministry regarding God’s will for our healing, believing that you receive as per Mark 11:23,24, dismissing symptoms and holding fast your confession of faith … etc.  Brother Bosworth didn’t get this from the metaphysical cults.  Like Gordon Lindsay and John G. Lake, he had lived in Zion, Illinois and followed the ministry of the healing evangelist John Alexander Dowie.

In New Thresholds of Faith he also quoted P.C. Nelson saying “Healing is part and parcel of the Gospel.”  In “Prevailing Prayer to Peace” he makes three references to Nelson’s comments on the Greek.  In The Woman Question he issued an acknowledgment of Nelson, saying:

“Dr. P. C. Nelson was a Baptist minister and theologian, and one of the most highly educated men of his day, when he received the Holy Spirit. He founded, in 1929, the Southwestern Bible Institute in Enid, Oklahoma, which later became Southwestern Assemblies of God College in Waxahachie, Texas. He went to be with the Lord in 1942.

It was my privilege to sit under his teaching in the early days of my ministry. And I came into possession of some of his mimeographed notes which have been of great assistance to me in the preparation of this book.”

In A Common Sense Guide To Fasting Brother Hagin devoted the last chapter to a Wigglesworth story.  In Prayer Secrets he told a couple of Wigglesworth stories in the first chapter and another one in the fourth chapter.  In Seven Steps to Answered Prayer he quoted Wigglesworth as saying “If you pray seven times for any one thing you prayed six times in unbelief.”  In The Real Faith he quoted him again saying “I am not moved by what I see. I am not moved by what I feel. I am moved by what I believe.”  And again in Understanding the Anointing – “I’d rather have the Holy Ghost on me 10 minutes than to own the world with a fence around it”.  Later in the book he stated:

“In 1947, I picked up a religious periodical and read that Smith Wigglesworth had gone to be with the Lord at age 87. I felt a great loss. I remember I went into my church and fell across the altar. I didn’t know the man personally, but I had read about him constantly, actually wearing his books out, until something from him rubbed off on me.”

This was three years before he ever heard the name E. W. Kenyon.  During my time at Rhema I also heard him reference Charles Finney, John Wesley, Martin Luther, and Finis Jennings Dake, among others.  Why then, do the critics insist that Kenyon was the true father of the WoF movement?  Very simply, they say that because of Kenyon’s background.  He lived in New England in the late 19th century at a time and in the location where the metaphysical theology of the New Thought movement was widespread.  From this they deduce that Kenyon took his theology from unbiblical sources.  I’ll cover Kenyon’s background in Part 3.