I never thought I’d be writing about Donald Trump, but the other day I came across something in his background that I believe plays a significant role in making him who and what he is today.  Religion.  Yeah, I know.  Trump doesn’t come across as a guy who puts a lot of stock in the Bible or godliness, but he is on record as being a member of the PCUSA; the liberal division of the Presbyterian Church that endorses gay marriage and rejects the inerrancy of scripture.  That should give you an idea of his belief system today.  However, his theological roots were established nearly a half century ago when he attended Norman Vincent Peale’s Marble Collegiate Church in Manhattan as a young adult.  In order to understand Trump’s religious views, you need to understand what Peale taught throughout his ministry. 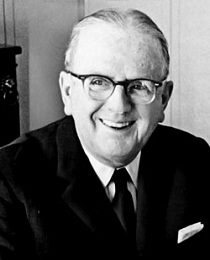 Peale is known for his New Thought based best seller “The Power of Positive Thinking“.  New Thought metaphysical theology was all the rage in New England in the late 19th and early 20th centuries.  Peale accepted the pastorate of a Reformed church in New York in 1932 during the Great Depression.  People needed hope, and Peale accommodated them by drawing from the likes of Charles Fillmore and Ernest Holmes, both New Thought adherents. Throughout his ministry Peale drew from the biblical references to goal-setting, achievement, and faith and overlooked or dismissed the biblical references to original sin, the substitutionary work of Christ, and the necessity of the new birth.  He preached a man-based message about human potential; a message that depersonalizes God rather than a Christ-based message about submitting to God’s will and winning the lost.  The following is from Dave Hunt’s book The Seduction of Christianity.

In an April 1984 newspaper interview, Normal Vincent Peale called the virgin birth “some theological ideas” of no importance to salvation.  On the Phil Donahue TV show in October 1984, he denied the necessity of being born again. “I have my own personal relationship with God, you’ve got yours,” he told a questioner. “I know a Shinto temple in Japan where I found eternal peace one day in my soul.”

Much more could be cited to theologically locate Peale outside of mainstream Christianity, but I think that’s enough for now.  I don’t make a habit of naming people who teach false doctrine, but in this case there’s no other way to inform people where the frontrunner for the Republican presidential nomination is coming from in his references to the Word of God.  Trump revealed his appreciation of Peale’s teaching a few years ago when he told Psychology Today:

“My father was friends with Dr. Norman Vincent Peale, and I had read his famous book, The Power of Positive Thinking. I’m a cautious optimist but also a firm believer in the power of being positive.”

When asked by pollster Frank Luntz whether he had ever asked God for forgiveness, Trump replied:

Another issue that Christians might be concerned about is abortion.  Trump was pro-choice on abortion until he began considering a run for the presidency as a Republican.  (This wasn’t his only flip flop.  See the video below for more.)  As Donald Trump travels around the country talking about his love for the Bible and gathering support from Evangelicals, bear this in mind.  He’s not talking about the same concepts that most Christians believe in.  He’s talking about a liberal wing of Christianity.  He’s talking about a faith system that doesn’t believe in the inerrancy of the Bible.  And he’s talking about a cultic theology based on Bible verses that are cherry-picked to support a lifestyle of materialism, and that disregards the sin nature and eternal judgment from which Jesus died to save us.  Let the voter beware.

The Truth About Trump

Faith of Our Fathers
This Fall’s Folly