When I was young I watched Star Trek a lot.  I’m not really a SciFi fan or space travel enthusiast.  I just liked the stories.  The writers were masters of drama, character development, and dialogue.  As an abstract thinker that always intrigued me.  One episode in particular that I enjoyed was A Taste of Armageddon, where the crewmembers of the Enterprise were declared victims of an interplanetary computer war and 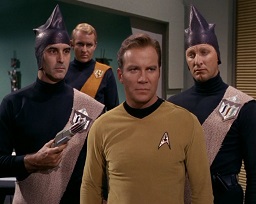 were condemned to die.  Kirk ends up destroying the war computer and declares to the leader Anan 7 that he now has a real live war on his hands, and if he doesn’t want to deal with the disastrous consequences of war he’d best pursue peace.  You see, both planets involved in the cyber war (Eminiar and Vendikar for those of you who are really into this stuff) had grown comfortable with the sanitary and orderly conditions that a cyber war provided them.  A real war could really make things messy and uncomfortable.

When the Supreme Court ruled recently that banning gay marriage was unconstitutional, it signaled an end to America as a Christian nation.  The America that I was raised in no longer exists.  The majority of Americans now see limiting the institution of marriage to one man and one woman as an outdated and discriminatory concept.

That America is gone forever, and in a way that’s a good thing.  Now Christians are waking up to the fact that there’s a war going on.  We got comfortable in Christian America.  We enjoyed our lives and lifestyles.  We got our degrees and started our careers and raised our families and watched our movies and sports and listened to our music just like the non-Christians, and we were okay with that because nobody was forcing their agenda on us and we still considered this our country.  But that has changed.

Now we realize the damage that was slowly being done while we were busy living our comfy lives.  Now we realize what’s at stake here.  Now we have decisions to make.  Do we want to stay in our comfort zones and ignore the cultural demise going on around us, or do we summon up the courage to stand up for our convictions and suffer the consequences?  God didn’t give us this country so that we could kick back and have a good time.  God gave us this country with its blessings of freedom and the opportunities it provided for us so that we could use it to further His Kingdom.  Now maybe we can use what time we have left to get serious about our faith and be about our Father’s business.

The church today has lost the identity that the church of the past had, where they saw themselves as pilgrims passing through this world on their way to heaven. (Heb. 11:13; I Pet. 2:11) We became much more focused on this world, and all the ways that it could accommodate us.  But this world is not our home.  The world is passing away, and the lusts thereof. (I John 2:17) The judgment of God will one day be poured out on it, so why would any Christian want to get comfortable with it?

I’m not saying that it’s a sin to have a nice house and a good career.  I’m not talking about legalism here.  I’m talking about perspective and priorities.  The cultural civil war that is brewing will require much more from us as believers than we have displayed in the past.  Persecution is coming.  The anti-Christian world view is the new norm in America, and we’re going to have to find the inner strength to stand up for the truth in the face of the opposition.  We’re going to have to put our reputations, our careers, and perhaps even our lives on the line as our values become more and more out of step with the majority.

Many people are worried about the threat from Islam, and the possibility of Sharia Law becoming a reality in the U.S.  I’m not too concerned about that myself, because I don’t think our system of government lends itself to that happening.  I think it’s much more likely that secular law will prevail.  The true threat in my opinion is from atheism.  Studies show that by 2050 there will be more atheists/agnostics than theists in the world.  People who hold to views based on religious convictions will be seen as a threat to the new paradigm.  That would be you and me.

So now we must decide.  Do we comply and assimilate into the new normal, or do we defy it at the risk of all that the old afforded us?  In the words of Moses, “Who is on the Lord’s side?” (Ex. 32:26)