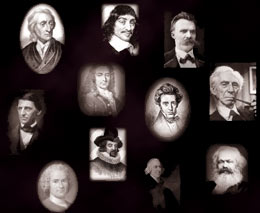 Modern philosophy is a branch of philosophy that originated in Western Europe in the 17th century, and continued until the early 20th century when it was replaced by postmodernism.  It focuses on the study and application of a certain method of thought that is notably different from earlier types of philosophy.  The dominant theme of modern philosophy is that people can gather and confirm knowledge through their own direct experiences and reasoning rather than automatically accepting established doctrines.  Due to its emphasis on the individual’s development of their capacity to reason, it is considered to be a distinctly western philosophy. Typically it is split into different major idea movements such as rationalism, empiricism, Marxism, and analytic philosophy.

Rationalism is a specific section of early modern philosophy that emphasizes the importance of linear and mathematical thinking.  Its scholars attempt to pick up where certain principles of modern science leave off. The established practices of deductive reasoning also have their roots in rationalism.

Empiricism was mostly developed as a rationalist counter-argument that outlines the need for experimentation and observation in order to arrive at established truths.

Marxism seeks to draw connections between innate human tendencies and the need for groups of people to work in order to build a stable society.

Analytic philosophy adds analysis of language to the ideas of logic that began with rationalism and empiricism.  Its underlying principle states that the linguistic elements of reasoning are just as important as the conclusions that result from the reasoning process.

Some of the more notable modern philosophers are: