A disturbing trend in the Charismatic Movement over the last thirty years has been the use of the title “Doctor” in promoting the ministries of people who have nothing more than an honorary doctorate, or a doctorate from either a diploma mill or a glorified diploma mill offering low-cost, low-standard, low-expectation degrees.  In all such cases there is an element of unethical misrepresentation a.k.a. fraud.  Let’s start with the honorary doctorates.

Typically in academia honorary doctorates are awarded to people who have made substantial contributions to their fields.  For example, the great violinist Midori Goto was awarded an honorary doctorate from Yale for her lifetime of devotion to the musical arts.  In her case, she had already studied music at Julliard and had earned both a bachelor’s and master’s in psychology from New York University.  On the other hand honorary doctorates have been awarded to uneducated people like Mike Tyson and Robert De Niro, and in one amusing case a Doctorate of Amphibious Letters was awarded to Kermit the Frog.  I kid you not.  In such cases the awards are clearly done as a publicity stunt for the university, but never does the recipient view the degree as anything beyond an honor and begin including the title with their name.  Even Midori goes simply by “Midori”.

A certain Christian university was handing out honorary doctorates like beads at Mardi Gras in the ’80s and ’90s to car dealers, entertainers, broadcasters, and of course ministers.  In many cases these people were big donors to the university.  While the car dealers and entertainers passed up the opportunity to start calling themselves “Dr. Whatever”, not so with many of the ministers who apparently saw nothing wrong with using the title.

Allow me to explain why it’s wrong.  An honorary doctorate is just that …. an honor.  It’s like awarding somebody the key to the city.  If that person went around saying that they owned the city because they have a key to it they’d be locked away.  It’s merely symbolic.  People who are awarded an honorary doctorate should just say “what a nice gesture” and leave it at that.  You don’t adopt the title and print it on all of your promotional material and expect people to start calling you “doctor”.  Are you serious?

In order for a person to earn a doctorate in theology they have to first of all earn a bachelor’s (which many of these ministers don’t have) and then a master’s (which most of them don’t have).  Then they study, research, and write a dissertation over a period of years to earn the doctorate.  It takes a lot of time, effort, and money.  To accept the title of “doctor” when you haven’t done the work or paid the money is an insult to those who have done the work worthy of the title.  Not only have you not done the work and paid the money, you also don’t have the knowledge that their efforts brought them.  Some of these so-called doctors can’t even speak proper English.  They have no understanding of hermeneutics, exegesis, systematic theology, or even basic theology in many cases.

It’s no shame to work in ministry without a degree.  Some of the greatest preachers in history didn’t have a degree.  But it is a shame to present yourself as having a degree that you didn’t earn, and that is only meant as an honor.  Honorary degrees are never meant to be used as credentials in ministry, and it is considered unethical to do so.  If you’re doing this you should stop immediately! 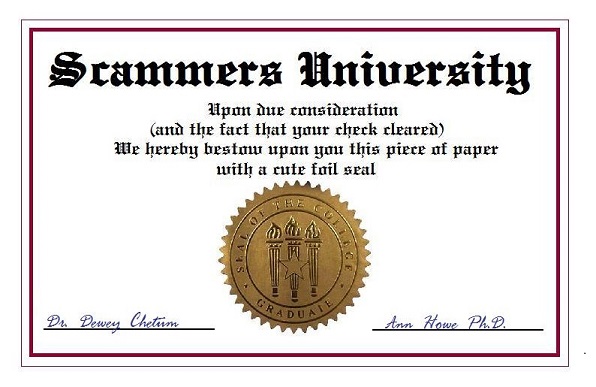 Second, there are many institutions that are basically diploma mills offering degrees by mail for little or no effort on the part of the minister.  I started down this road when I was young because I didn’t have the funds to get a real education in theology, but I soon wised up.  A few well known ministers have unfortunately chosen to go this route, and present themselves as having a degree from Glory Cloud Christian University or whatever in Some City, Iowa or wherever.  Not cool!

The third case is similar to the second.  A lot of schools have popped up over the years offering both class-based and online degrees at very affordable rates.  They are accredited from obscure accrediting organizations and make it easy for Joe Preacher with no education beyond high school to become Dr. Preacher in two or three years.  Unacceptable!

If you want to go to a low-cost bible school to learn that’s fine.  But don’t adopt the title of “doctor” from a sub-standard institution because it’s fast and cheap.  Seriously, would you take your kids to a medical doctor who blew through a two or three year medical education right out of high school (a.k.a. a quack)?  Or would you want to make sure that they went through all of the rigorous training and education that the system requires of physicians?  So why would you expect others to entrust their spiritual care to somebody who has misrepresented themselves as having put forth similar efforts in matters of theology?

A typical legitimate theological doctoral program takes five years to complete, following a prerequisite three year master’s program which follows a four year bachelor’s program.  That means a total of  twelve years of higher learning, which would put the candidate in their thirties by the time they complete their doctorate.  If a program pales in comparison to those standards then it probably isn’t legit.

You know the commandments: ‘Do not commit adultery,’ ‘Do not murder,’ ‘Do not steal,’ ‘Do not bear false witness,’ ‘Do not defraud,’ ‘Honor your father and your mother. (Mark 10:19)

When you present yourself as a doctor, you are essentially telling people that you have done the academic work required to receive a doctorate from a learning institution that is accredited by an accrediting agency recognized by the Department of Education or the Council on Higher Education Accreditation.  If that isn’t the case, you are in effect defrauding people through misrepresentation.

In the 23rd chapter of Matthew Jesus said of the Scribes and Pharisees:

But all their works they do to be seen by men. They make their phylacteries broad and enlarge the borders of their garments.  They love the best places at feasts, the best seats in the synagogues, greetings in the marketplaces, and to be called by men, ‘Rabbi, Rabbi.’   But you, do not be called ‘Rabbi’; for One is your Teacher, the Christ, and you are all brethren.  Do not call anyone on earth your father; for One is your Father, He who is in heaven.   And do not be called teachers; for One is your Teacher, the Christ.  But he who is greatest among you shall be your servant.  And whoever exalts himself will be humbled, and he who humbles himself will be exalted. (Mat. 23:5-12)

People who are fond of putting titles with their names are doing so in violation of what Jesus said.  God doesn’t place us in the body of Christ so that we can be honored and applauded by men.  He put us here to serve each other and to reach the world with the gospel.

Misrepresentation is widespread in the ministry, and that is especially true in the Charismatic Movement unfortunately.  If we want to be taken seriously as ambassadors for Jesus Christ and bible teachers, we have to raise the bar.  So the next time you hear “come hear Dr. Mary Imaprophet minister at Living Large Fellowship” or “Dr. Joe Apostle will be speaking at First Church of the Radically Saved” you should ask them or their associates “Where did they get their degree?”, “What did they write their dissertation on?”, “What accrediting association backs them?”, or “How many years did it take them to earn that doctorate?”.  If they can’t answer those questions to your satisfaction, you have to ask yourself “if they can’t be honest and up front about this, what else are they misrepresenting?”

How to Address Those with Honorary Degrees (Protocol School of Washington)

Chester the Pug Gets an Online Degree

No Excuses
The Market-Driven Church